1000s of knitted, crocheted, sewn and paper poppies made by individuals and groups around Stroud and from throughout the UK, remembering those who lost their lives in the Great War 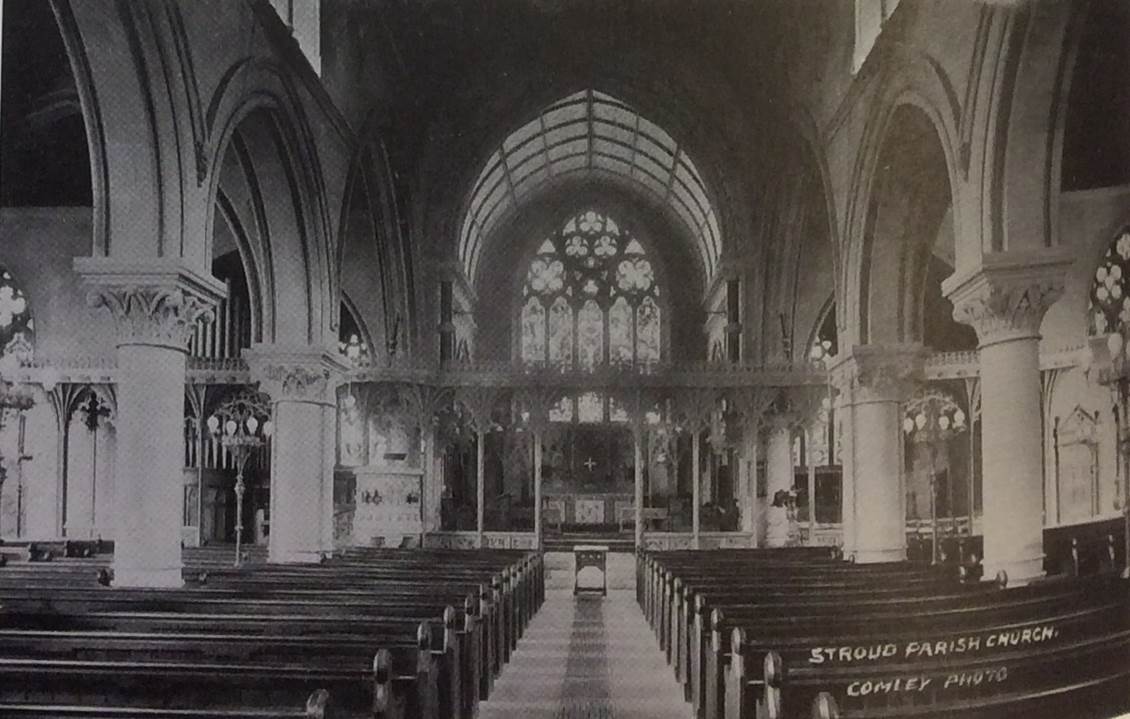 St Laurence Parish Church just prior to the installation of the cross above the rood screen in 1914
Revd Henry Proctor
Vicar of St Laurence, 1912-1919
​​​Henry Proctor was the son of George Proctor, who had been curate at St Laurence over 50 years earlier. Born in Stroud in about 1852, he was vicar at St John’s in Newland, Under Principal at the Gloucester, Bristol and Oxford Diocesan Training College for Schoolmistresses at Fishponds, near Bristol, vicar at St Luke’s in Gloucester, and rector at Leckhampton, before becoming vicar at St Laurence in 1912. It was Proctor who, in 1912, bought Rodney House by the church, which was later bought from him by the diocese for use as the vicarage (today it is the Church Court Care Home). The nearby St Alban’s Church was the idea of Proctor, who was concerned about the large and growing population on Stroud Hill.
Revd Henry Proctor, with members of the Stanton family, at the opening of the sister church of
​St Albans in Parliament Street, Stroud, in 1916
"MY DEAR FRIENDS, I have said so much to you about the War from the pulpit, that there is no need for me to speak about it here. Only "let us not be weary in well-doing:" let us not allow ourselves to grow callous or indifferent, if things should seem to go well with us, or if the period of suspense be prolonged. God has spoken to us - personally, and as citizens; let us respond promptly and earnestly, and preserve in whatever amendment of life we undertake. At least let us "pray, and not faint.""
Revd Henry Proctor, Vicar of St Laurence 1912-1919, ​in the Parish Church Magazine
A List of the Soldiers and Sailors of the Parish
on Active Service at the Outbreak of the War
from the Parish Church Magazine
​"Always in our thoughts though in a foreign grave"

​"To His Love"
by Ivor Gurney, 1917
A Gloucester man, Ivor Gurney was a talented young composer before joining the army in 1914, and loved the Gloucestershire countryside. He was bipolar and suffered from manic depression and two nervous breakdowns, and after the war was admitted to an asylum where he remained until his death in 1937. This poem is a monologue, in which one soldier speaks to the fiancé or girlfriend of a dead soldier of his death— mourning his loss and regretting that he will never have the pleasure of the dead soldier’s company again. The dead soldier that Gurney was referring to was his bosom friend and fellow poet, Will Harvey, who Gurney thought had been killed but who, in fact, survived the war, albeit badly wounded and held as a prisoner of war. The 'small boat' mentioned in the poem was called 'Dorothy', and he kept it at the lock-keeper's cottage in Framilode where he lived for a while.
(Additional information courtesy of Geoff Shaw)
He's gone, and all our plans
Are useless indeed.
We'll walk no more on Cotswold
Where the sheep feed
Quietly and take no heed.

His body that was so quick
Is not as you
Knew it, on Severn river
Under the blue
Driving our small boat through.

You would not know him now ...
But still he died
Nobly, so cover him over
With violets of pride
Purple from Severn side.

Cover him, cover him soon!
And with thick-set
Masses of memoried flowers -
Hide that red wet
Thing I must somehow forget.