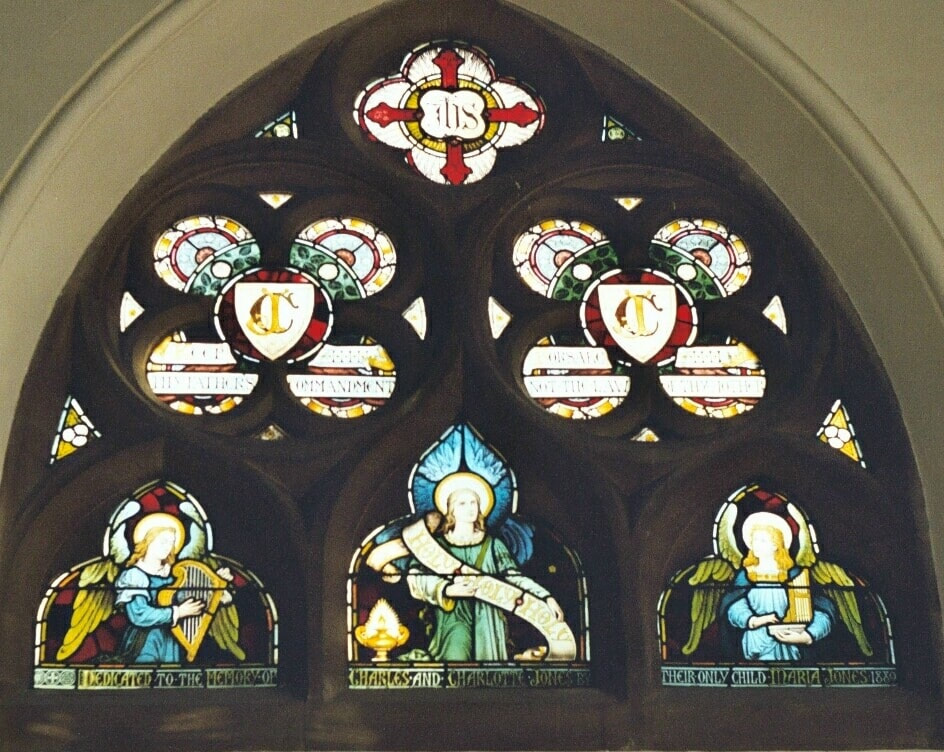 ​6 Window in Memory of Charles Stanton, 1868
LOCATION Lady Chapel
MAKER Lavers & Barraud, 1868
THEME The Parable of the Talents "He that had received one went and digged in the earth and hid his lord's money" (left); "Well done good and faithful servant" (centre); "He that had received five talents went and traded with the same" (right)
DEDICATION The plaque to left of window states that this window was given in memory of Charles Stanton of Upfield, Paganhill, who died aged 67 on 27th March 1863, by his surviving wife
In its bottom right-hand corner, the window shows a bale with a wooltrader's mark
​7 Window in Memory of William and Ann Stanton, 1866
LOCATION Chancel
MAKER Heaton Butler & Bayne, 1866
THEME Scenes from the Life of Jesus The Annunciation; The Wise Men; The Resurrection; The Ascension; The Nativity; Flight from Herod; The commissioning of the Disciples; Pentecost.; The Crucifixion. The two small lights at the top show the Greek letters Alpha and Omega ("I am the Alpha and the Omega, the first and the last, the beginning and the end“), and the IHS monogram, an abbreviation or shortening of Jesus' name in Greek to the first three letters
DEDICATION "To the glory of God and in affectionate remembrance of William Stanton late of The Thrupp in this parish. He died July 18th 1841 aged 83. Also of Ann his wife who died November 16th 1842 aged 79.” 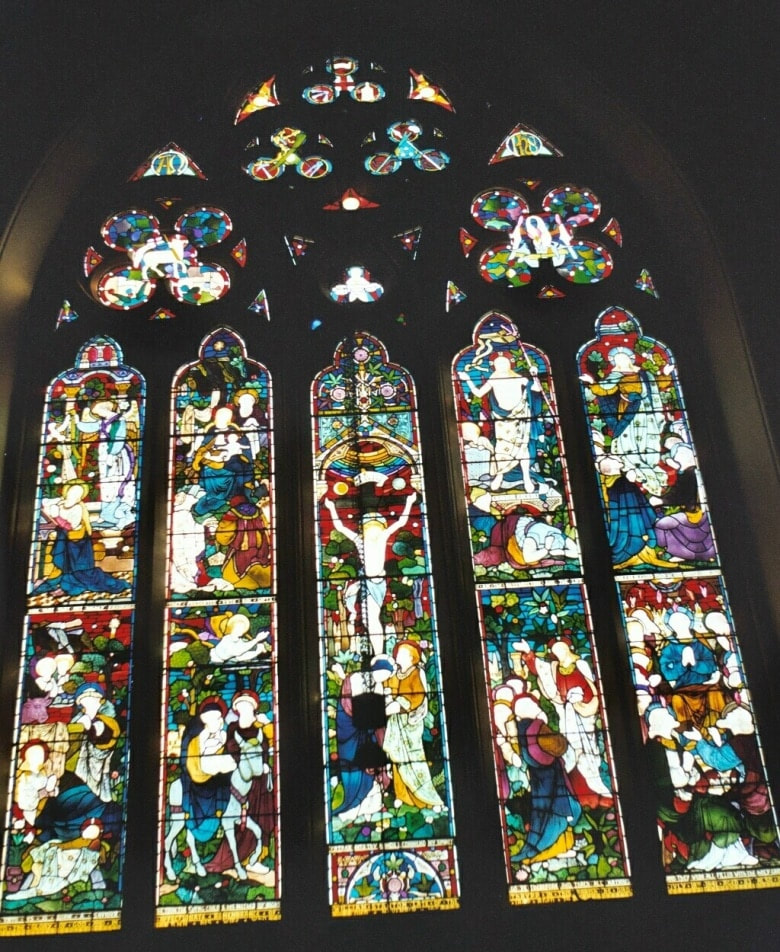 ​8 Window in Memory of Dr John Badcock, about 1885
LOCATION East wall by the organ
MAKER Heaton Butler & Bayne, about 1885
THEME The Temple in Jerusalem The inscription in the top left small window reads, "Lord, I have loved the“, and top right reads "habitation of thy house“. The inscription at the bottom of the windows reads, "O how amiable are thy dwellings, thou Lord of hosts.“
DEDICATION This window is a memorial to Dr John Badcock who was vicar when the church was rebuilt in 1886
​9 North Transept Window, 1869
LOCATION North transept, east wall
MAKER Unknown, 1869
THEME Abraham Buries Sarah Just discernible under the right-hand picture is "Abraham buried Sarah...in the cave of the field of Macpelah"
DEDICATION Only "the field" in the middle light, and "1869" in the bottom right-hand corner are now clearly visible 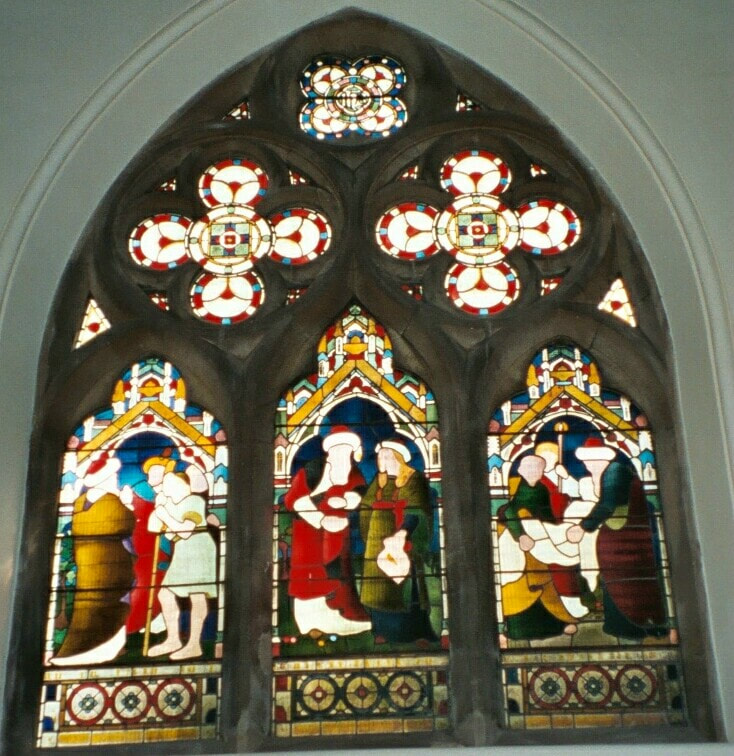 ​10 Window in Memory of John and Hannah Biddell, about 1868
LOCATION North transept, north wall (St Stephen's Chapel)
MAKER Heaton, Butler & Bayne
THEME St Stephen and The Acts of Mercy The main part of the window, badly weathered, shows the "Acts of Mercy“: Feed the hungry; Give drink to the thirsty; Clothe the naked; Assisting the blind; Shelter to the homeless; Visit the sick; Visit the imprisoned; and Bury the dead. The top part of the window depicts the Stoning of Stephen, the first Christian Martyr
DEDICATION The inscription at the bottom reads, "To the honour and glory of God and in memory of John Biddell of Stratford [Abbey] near Stroud who died April 25th 1863 aged 74 years and of Hannah his wife who died February 22nd 1860 aged 62 years“
John Biddell was a wealthy businessman and mill owner, who died on the 25th April 1863, aged seventy-four years. He is buried in Stroud Cemetery. He was the owner of Stratford Mill (a flour-mill) and the adjacent Stratford Abbey, and later expanded by acquiring Cuttle’s Mill at Wallbridge. Although very prosperous himself, he took great interest in the problems being experienced by local farmers and worked ceaselessly to protect British agriculture. On the 25th February 1845 a testimonial was presented to him by the farmers of Gloucestershire, recognising the work he had done on their behalf. A silver kettle with stand was inscribed “Presented to John Biddle, Esq; of Stratford Abbey near Stroud, by the farmers of Gloucestershire for his zealous exertions in the cause of Protection to British Agriculture Tues, Feb 25th 1845”. It was noted that there were three hundred subscriptions of five shillings each. He was involved with local charities, helping to raise money for schools and Stroud Hospital. 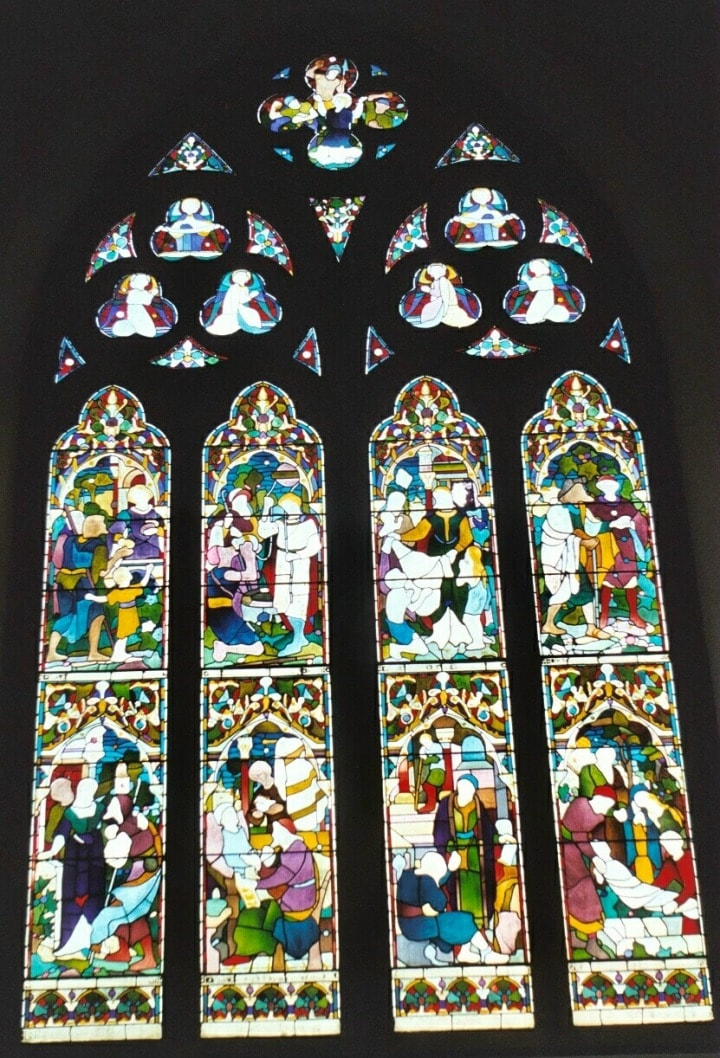 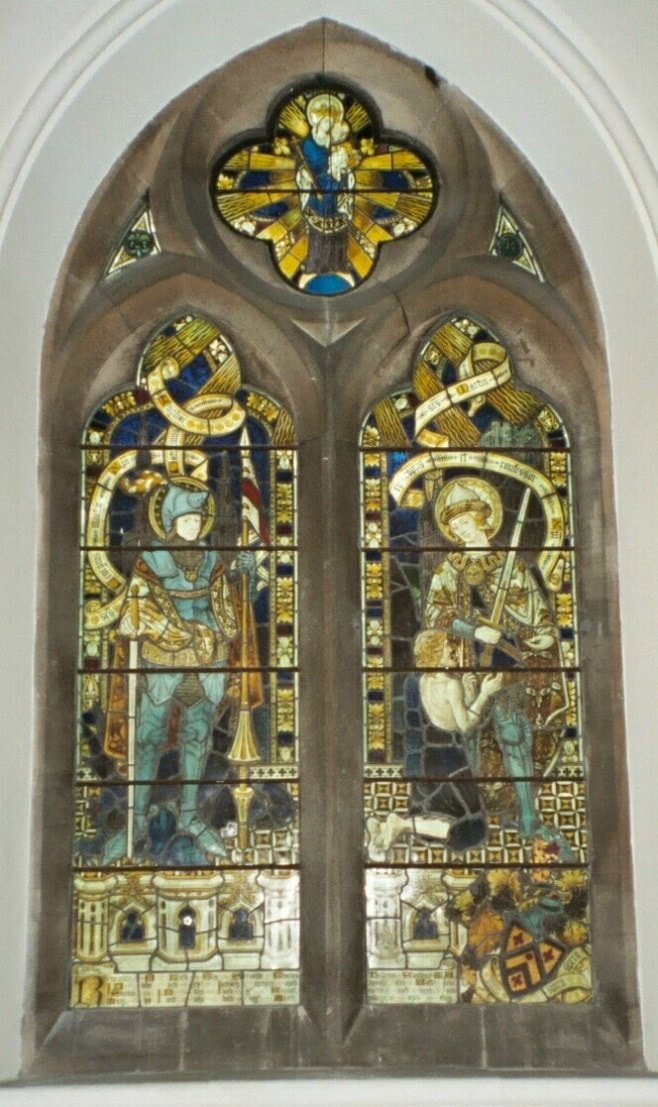 ​13 Window Dedicated to Children of the Schools, 1877
LOCATION West wall of tower
MAKER Ward & Hughes, London, 1873-1877
THEME Jesus blessing the children; Christ Blessing the Children
DEDICATION Contributions towards the cost of this window were collected by children "those of the schools and others" 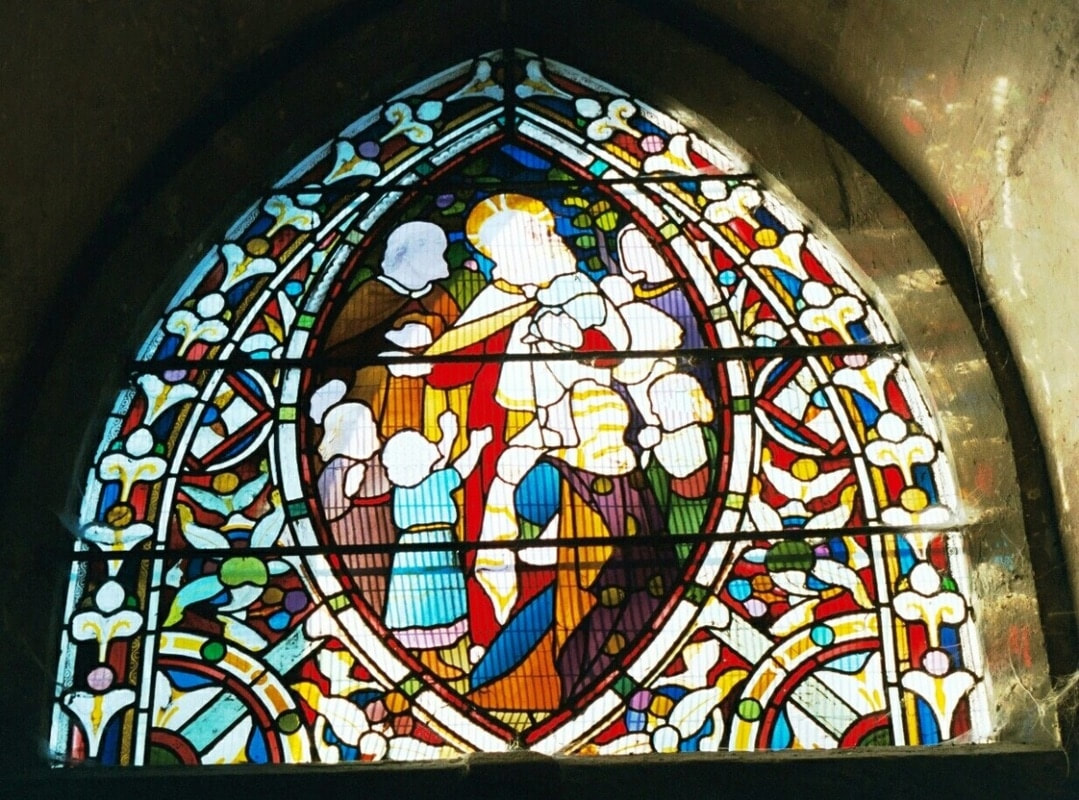